Are You Taking Responsibility?

This one is fairly straightforward. Are you taking responsibility in business for both the good and the bad? What does that even mean? That’s our topic for discussion today.

Let Me Tell You a Story

President Harry Truman had a sign on his desk that said “The buck stops here”. What he meant by that was, as President, he did not have the option to pass the buck when it came to mistakes or failure. He was the boss and the buck stopped right there. “What does that have to do with my business?” I can hear you say that pretty clearly.

That’s pretty smart advice for any business owner who wants to be more successful. When it comes to the results of decisions you make, don’t pass the buck.

Everyone is happy to take credit for a successful outcome; as well they should if they were directly responsible for that success. That’s the easy part. The hard part is owning up to your own mistakes.

Now This is The Hard Part – The Guilt

Taking responsibility in business means it’s up to you. There is somewhat of an inclination to try and blame someone or something else for a negative outcome. The most successful people fight that inclination and accept the blame for their mistakes as readily as they accept congratulations for their successes.

They do so because they realize that being the captain of the ship means that all decisions start and end with you. Am I right? Don’t be that one business owner that suffers from guilt.

If you happen to make a bad decision then you own that fact, tighten your belt, and move forward armed with the knowledge to never repeat that mistake again. This is a part of the process of growth. It is a process that demonstrates that the greatest opportunity arises from failure.

By avoiding the repercussions of that failure, you also avoid the opportunity to grow as a leader and learn from your own mistakes. In other words, you condemn yourself to make that same mistake over and over. Yikes!

So, if and when you are faced with a bad business situation of your own making, don’t pass the buck.

The buck stops with you. Accept that and move on. 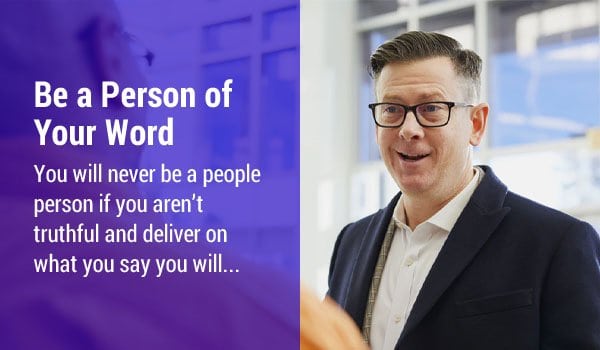 Be a Person of Your Word

Be a Person of Your Word

You will never be a people person if you aren’t truthful and deliver on what you say you will. People will start to avoid you when this happens. You need to make sure that if you promise something, you will do whatever it takes to make sure you get it done. Are you a “Be a Person of Your Word” kind of person?

Don’t Promise if You Can’t Deliver

Of course, don’t promise things if you feel you cannot get them done. You see this happen with companies all the time. They agree to anything customers ask for and then are unable to give them what they want. That is never a good situation to be in. People will react negatively when this happens. The company won’t get more business, and their reputation will be tarnished as a result.

Don’t let this happen on a personal level

Be confident in knowing what people are asking you to do. Don’t agree just because you don’t want them to become upset with you. They will be more upset if you aren’t able to produce what you told them.
If you agree to meet with someone, be sure to keep the appointment. There are certain circumstances where you have to cancel, once in a while. That’s okay, but don’t make a habit of this. Being a people person means being dependable.

What are YOUR Standards?

It’s also okay to expect the same standards as others. If you find someone who is not dependable, you may have to cut ties with them. This may seem counterintuitive to the whole idea of being a people person, but it’s not. You are expected to be reliable, and you should expect the same from everyone you deal with.

Of course, there are going to be occasions where people have to break appointments. This is normal and should be expected. Don’t be too hard on people when it happens. But, here too, they shouldn’t be repeat offenders. It’s important to be understanding, but there is a point where some people will take advantage of this.

Be a Person of YOUR Word

When you are known as a person of your word, others will have no problem recommending you. In fact, they will start referring to you even without you asking for it. This is one of the foundations of being a people person.

Being a people person is mostly about common sense. It’s about interacting with others and having some expectations for everyone you deal with. It’s about developing friendships as well as work relationships. As you increase the number of people, you will discover what works best for you and those people.

Business Is Better Together

Check out what we have in the shop. Dismiss